skip to main | skip to sidebar

Concert Photography With The Leica M9

As a documentary photographer, my Leica cameras are generally my go-to tools. But, lately I find myself shooting more and more concerts with my Leica M9, so I thought I would write an article about the pros and cons of using the M9 for concert photography. 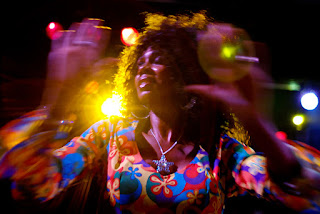 First a little background – when I started shooting concerts my main camera was a Canon Canonet QL17 G-III rangefinder. This is a wonderful camera for a beginning concert photographer. It has a fast 40mm f1.7 lens, a nice bright viewfinder, and is compact enough to get into shows without photo credentials. The Canonet was one of my first rangefinders, and the camera I used to familiarize myself with the quirks of rangefinder photography.

Eventually I moved up to a Voigtlander Bessa-R body along with a few Leica screw-mount lenses, then on to Leica M bodies with newer and faster Leica M lenses. But by then I was shooting concerts for various publications and primarily using my Canon SLR’s and DSLR’s. The Leica gear was on the shelf when it came to concerts, that is, until I purchased the M9.

I had little hope that the M9 would be a good concert photography camera after the dismal results I had shooting with the M8 in low-light conditions. Until, just for fun, I brought my new M9 to a concert that I was NOT signed up to photograph. The images weren’t the greatest as it had been a while since I photographed a concert using a rangefinder, but the quality was there, and I knew it was something I wanted to explore. Over the next few months I started using the M9 for actual gigs with great success.

So now, on to the pros and cons. As many of you know, there is no perfect camera for all situations. I still use my Canon setup for many of the concerts I shoot, but in some situations the M9 is a better tool.

· Weight – A big selling point for Leica shooters is the compact size of Leica bodies and lenses. With three Leica lenses in my bag it still feels as though the bag is empty. Try that with just one fast Canon lens. I don’t think so. And if I REALLY want to go light, I can skip the bag and photograph a show using two lenses, one on the M9 and the second in my pocket.

· Fast Glass – Leica makes some incredibly fast lenses that are razor sharp wide open. My Summicron 50mm at f2 is as sharp as my best Canon lens at f8. When it comes to concert shooting fast glass is a must. Oh, did I mention the Leica Noctilux 50mm F0.95?

· Manual Focus – There are often concert lighting situations where my Canon DSLR will just not auto focus. This is especially true when the subject is heavily backlit. With the M9 focus is a breeze. Well… usually. See the “Cons” section for the other side of this coin.

· Amazing Image Quality – When the light is good the image quality of the M9 is amazing. Rich colors, deep blacks, and creamy bokeh. At ISO 1250 noise isn’t too bad and looks more like film grain than the digital noise on a DSLR.

· B&W Film Look – The combination of Leica glass and the M9 renders B&W images like film. At least as close as I’ve been able to get without using actual film. I find the look of B&W images taken with the M9 very pleasing, for both concert and all other types of photography. 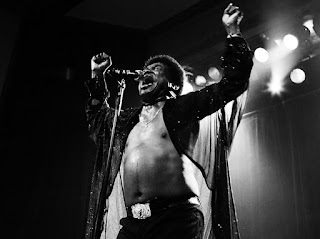 
· Fixed Focal Length – For most concerts the photographers in the pit are limited to the first three songs of the show. That means we have very little time to do things like change lenses. Zoom lenses are incredibly useful for photographers looking to get a variety of shots in roughly nine minutes of shooting. With the fixed focal length of Leica lenses I really have to think about the shoots I want to get before the shows begins. But no matter how much I plan ahead there will always be a situation where I wished I had a different focal length on the camera. Such is life; move on to the next picture.

· Manual Focus – Wasn’t this a “Pro”? Well, yes. But… this can be a “Con” when shooting a concert with fast moving subjects. For example, I recently used the M9 to photograph the “Air Guitar Championship” in Denver. What a mistake. The contestants were moving around the stage so fast that I couldn’t keep up with them. Imagine shooting a soccer game with a rangefinder camera. It’s not exactly what they were made for. Luckily I was able to eek out a few decent shots. Note the word “luck”.

· High ISO Performance – The high ISO performance of the Leica M9 is better than the M8, but not as clean as the Canon 5D MkII. I can get good images up to ISO 1600 on the M9. However, I prefer to shoot at native ISO’s, so I generally don’t go past ISO 1250 on the M9 unless I absolutely have to. As I mentioned in the “Pros” section, the noise you get with the M9 is similar to film grain, so it’s an even trade off when shooting in the ISO 1250 range.

· Manual Focusing Wide Open Takes Practice – Did I mention Leica makes fast lenses? Well, shooting at f1.4 requires you to be spot-on when manual focusing. This can be difficult, especially if you are new to rangefinders. With such a shallow depth-of-field, just being slightly off will cause your image to be out of focus. The good news – concert shooting is a great way to practice your rangefinder focus ability. Of course, you should only practice during leisurely shooting. Editors don’t care about practice; they want images.

· Viewfinder Flare – This is a situation that I’ve only run into once, but I feel I should mention it. In a heavily backlit stage setup you may get viewfinder flare. Specifically, light coming into the distance meter window at a certain angle and blowing out the focus patch in the viewfinder, making it impossible to manually focus. This can be quickly solved by moving the angle of the camera, but may cause you to loose the shot.

· Price – You mean you read this far and you didn’t know Leica’s were pricey? 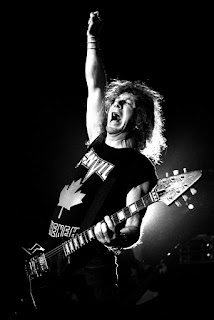 So how do I choose when to use the M9 for concert photography?

· Close Shooting – Because you are looking through a viewfinder and not through the lens, the Leica should be used when you are up close and personal. That means in the photo pit, or if there is no photo pit, in the front row.

· Slow Movers – Shooting a wild and crazy punk band that won’t stay still? The M9 may not be the right tool. Again, manual focusing on a fast moving subject is difficult when using a rangefinder. Use it for acts that are a bit more stationary.

· Good Stage Lighting – I always tell beginners that knowing the conditions of the venues in your town is one of the best ways to get good concert images. This is especially true when it comes to light.

For example, I know that every show at the “Larimer Lounge” in Denver is poorly lit with only a few red lights. Therefore, if I am going to shoot without a flash it will require the high ISO performance of my Canon 5D MkII as well as very fast prime lenses. The M9 will not do the trick under these conditions. On the other hand, the “Boulder Theater” usually has wonderful stage light; this is were the M9 will outperform the 5D MkII.

· The More Songs The Better – As I mentioned earlier, when you only have the first three songs (or less) to photograph a concert, a zoom lens comes in handy. This isn’t a major factor when choosing which camera I use, but the more time I have to shoot, the more likely I am to use the M9 given the other conditions are favorable.

· A Different Look – I find that the photographs I make using the M9 have a different look to them. I don’t know how to explain it really, but I can see it. When I want a different look I often reach for the Leica M9.

So there you have it - my thoughts on being a Leica photographer and shooting concert photography using the Leica M9. It really is an amazing camera. But it does have it's limitations. Used in the right conditions however, the Leica M9 performs like a champ.

Questions? Comments? Feel free to drop me a line.

Very interesting Article.
I'm a Leica user(actually having a M8, wanting to switch to the M9), and i love concert/live events photography but i'm kinda frustrated with the noise starting from 1250 ISO.
I'm thinking about getting more seriously into this type of photography as a job and was wondering if a M8/M9 would do it(this is how i found your site).
I guess i'll save some money, sell my M8 body and get a m9's :)